cs3.pvpwar.net
закрыт
0 игроков
Rules
On the server is prohibited:
1. Using ANY cheats (cheating), the use of bugs in game.
The punishment - indefinite blocking.
1.1 Insulting players, Mat and any other attempts to humiliate other players. (including voice communication)
Punishment - blocking of from 1 to 7 days.
1.2 hardcore camping - no player in the zone of active actions not connected with execution of team tasks, Well as the desire to end the round on the limit, if this will lead to the defeat of the team (on maps as and cs to CT, and de for T).
Punishment is at the discretion of the administrator.
1.3 Deviation from the job - failure to perform player tasks described in the briefing to the map, when there are all the possibilities: when a player who plays for terrorists with bombs, puts a bomb while on bombline, and he does not interfere with an opponent; when a player who plays for the ST, not save hostages being close to them, and he does not interfere with the opposing players, and the PT team has a numerical advantage.
Punishment is at the discretion of the administrator.
1.4 actions not related to the purpose of the game - periodically carry out player action unrelated to the objectives of the game, which can be characterized as actions which simply lost time: unjustified suicides, aimless jumping in textures and shooting at him, he flips his spawn smoke grenades or other grenades, etc., that can be described as dodging a player from the batch job or the killing of enemy players.
Punishment is at the discretion of the administrator.
1.5 Flood - writing meaningless or unnecessarily repetitive messages through the commands say and team_say. Constant, not related to game situations, talking on the microphone, preventing the players. (DEADам can)
Punishment is at the discretion of the administrator.
1.6 to Use nicknames that contain: one character, profanity, and insult individual players and the gaming community, a random string of characters (with no explanation to the player using nick).
Punishment - blocking of from 1 to 14 days. Repeated violation - a termless.
1.7 the Use of any kind of malicious programs that violate the health of the server.
The punishment - indefinite blocking.
1.8 Monitoring (obtaining information about the location of mobile objects on the map (players, weapons, bomb, hostages) in a manner different than your own monitor or speakers/headphones) is equivalent to the use of cheats.
The punishment - indefinite blocking.
ТОП-3 CS1 - CS Classic
ТОП-3 CS2 - Deatmatch
ТОП-3 CS3 - TestServer
Скриншоты 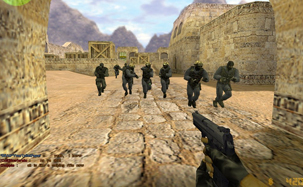